I Confess ! - Seal of the Confessional in Louisiana

The  recent case of George Charlett Deceased No. 2013-C-2879 before the Louisiana Supreme Court has aroused concern amongst Catholic Clergy that it could be the first round in a battle to restrict the seal of the confessional

In the case the plaintiff, a child, alleges she was sexually touched by George Charlett a parishioner, not  a clergyman, at her local Church.  She alleges that she told her Parish Priest what was going on but he in effect did nothing.  The estate of George Charlett was being sued and also the Diocese for the alleged negligent actions of the Priest in not reporting the allegations to the authorities.  It is implied that she told the Priest whilst in confession though that specific point is a little unclear from the sparse facts in the Supreme Court judgment.

Can.  983 §1. The sacramental seal is inviolable; therefore it is absolutely forbidden for a confessor to betray in any way a penitent in words or in any manner and for any reason.

Can.  984 §1. A confessor is prohibited completely from using knowledge acquired from confession to the detriment of the penitent even when any danger of revelation is excluded.

and so to that extent I can see the reason why the Diocese was concerned since if what the girl is saying is untrue the Priest is not allowed to say so or to give evidence about what was really said in the confessional.  This is the dilemma that famously faced Montgomery Clift in the  Alfred Hitchcock movie "I Confess" 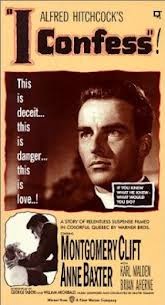 I doubt if the case will be appealed to the US Supreme Court since it is still in its preliminary stages and no evidence has been heard yet.  As the Louisiana Supreme Court judgment noted

In other words preventing the evidence being heard was, at this stage, premature.  That said the issue of the "secrecy of the Confessional" and how it applies in situations where the law requires suspicions/knowledge of child abuse to be reported is likely to become an increasing issue in various jurisdictions over the next decade

Coincidences coincidences !!.  Shortly after I had published the above regarding Confession in the US the excellent Frank Cranmer put up a post

Oz Anglicans reject seal of confessional
which is well worth reading.  I agree with Franks conclusion
It seems likely, therefore, that the seal of the confessional will come under further scrutiny in the UK.
Posted by Neil Addison at 10:29