Ashers Bakery and the "Gay Cake" 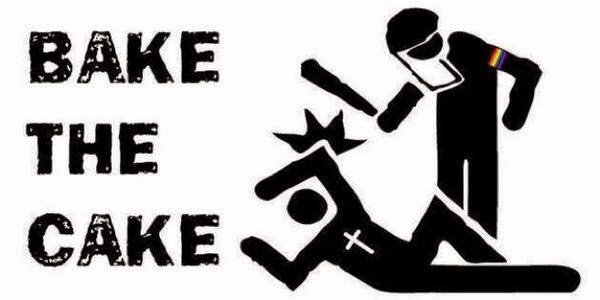 Judgment has been delivered in the Northern Ireland case of  Lee v Ashers Baking Company [2015] NICty 2 (Court summary HERE).  The case considered whether it was illegal for Ashers to refuse to bake a cake which carried a logo saying "support gay marriage" along with a picture of Bert and Ernie from Sesame Street, and the logo of the organisation  'Queerspace'.  More background facts available HERE and a picture below of what Mr Lee wanted putting on the cake 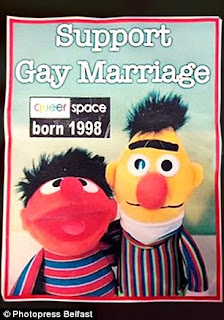 Unlike many similar cases which involved Bakeries refusing to make a cake for a Same-Sex Marriage reception this case involved a Bakery being asked to bake a cake which explicitly endorsed the campaign to legalise Same-Sex Marriage in Northern Ireland.  The Company was run by a family who are devout Christians and who believe that Marriage is between a Man and a Woman

The case revolved around 2 separate legal issues namely whether the refusal to make the cake constituted Discrimination on the grounds of Sexual Orientation contrary to the  Equality Act (Sexual Orientation) Regulations (Northern Ireland) 2006 and whether it constituted unlawful discrimination on the grounds of Political Opinion contrary to the  Fair Employment and Treatment (Northern Ireland) Order 1998.

Surprisingly in this case the Judge held that the refusal of Ashers to bake the cake constituted direct discrimination on the grounds of sexual orientation simply on the basis that the buyer, a Mr Lee, happened to be Gay even though many supporters of Gay Marriage are heterosexual and similarly many Gay people are opposed to Gay Marriage.  As is usual in these cases the Judge paid lip service to the Ashers rights to Religious Freedom under Article 9 and then stated that the law overode those rights

Somewhat less surprisingly the Judge also decided that the refusal constituted discrimination on the grounds of political opinion.  Damages were assessed as a nominal figure of £500.

The case will undoubtedly be appealed but what does emerge from it is the complete intolerance of the "Equality" industry and the way in which Equality Law is being used to destroy individual freedom including the freedom of a Bakery company to decide what products it wants to make.

We in Britain have just been celebrating the 70th anniversary of our victory in WW2 but frankly what are we celebrating ?, 'Freedom', but not if you run a Bakery it would seem.

As Hitler himself said, " The best way to take control over a people and control them utterly is to take a little of their freedom at a time, to erode rights by a thousand tiny and almost imperceptible reductions. In this way, the people will not see those rights and freedoms being removed until past the point at which these changes cannot be reversed.”

That is what is happening, in the UK, in the EU and in other places too.

It should now be possible successfully to sue a Muslim printer for refusing to print cartoons of Mohammed.

And for a supporter of ISIS to require a flagmaker to provide a black flag of the Islamic State.

And for a Nazi to require a flagmaker to provide a swastika flag.

And for a Christian to require a bakery run by sodomites to bake a cake with the text of Leviticus 20:13.

The fact that gay people are still routinely subject to physical violence in the US and UK, often in the name of religion, seems to be lost on you. Otherwise, why would you adorn this post with that offensive cartoon that somehow implies that conservative christians are the real victims of some conspiratorial "Gay Agenda" even to the point of physical attack. For anyone who isn't a conservative christian, your platitudes about tolerance and equal respect ring quite hollow.

I assume that Mr Lee does not own the copyright in the Sesame Street characters. Had the bakers fulfilled the order, they would have breached copyright.

To Jim Green: It's reprehensible that gay people are subjected to physical violence; however, Christians really are the victims of a gay agenda. Christians may profess as loudly as they like that fornication and adultery are evil acts, and no one gets called a "heterophobe". But such is the aura of respect and reverence for two sodomites locked in their parody of the marital embrace that you can be arrested for "homophobia" if you say that their act is evil and depraved.

Not sure now if my comment has gone, so I will ask my question again: Have you heard anything at all since the day before the Ashers Bakery Case went to appeal this month, May 2016? I can find no reference to it anywhere online at all!

No judgment on the Appeal so far (1st June )